A touch screen computer uses a display screen that has a touch-sensitive transparent panel covering the screen. Instead of using a pointing device such as a mouse or light pen, you can use your finger to point directly to objects on the screen, providing a natural interface for computer novices. Use of touch screen technology on point of sale terminals has proven to be a valuable and cost effective tool in the retail and hospitality industry, reducing transaction times, operator errors and training time in an industry with a very high employee turnover rate. Touch screen technology along with more intuitive operator entry and and lookup facilities significantly reduces new employee training time and improves efficiency. These benefits translate into lower training costs, increased employee productivity and an increase in customer satisfaction.


Purple-I recommend the use of J2 560 Integrated touch screen computers with Purple-I RMS software to achieve optimum performance. Integrated Touch screen EPOS computers are just like normal desktop computers with RAM, hard drive and CPU, except that they have been specifically designed for use as EPOS terminals with appropriate connecters and drivers to connect with EPOS peripherals. An integrated EPOS Touch Screen computer has computer and monitor housed in one shell, which means less cables and a smaller footprint which requires less space. The footprint of the 560 is particularly compact, making it the perfect unit for the space conscious retailer. The electronics are located within the head of the 560 which enables effective and simple wall, pole or counter mounted positioning via standard VESA mounts.

Desktop PC based systems with separate touch monitor are also available for customers who do not require an integrated system. 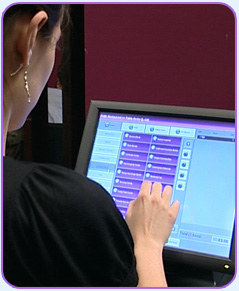 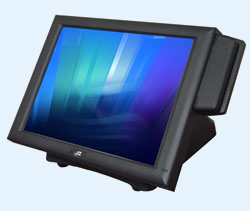 © Copyright purple i 2016. All Rights Reserved.